The Device Provisioning API provides a resource for de-provisioning things and policies.
If your use-case allows, we recommend to use the HTTP API directly, see https://apidocs.bosch-iot-suite.com/.

However, in this example we assume that you need to delete a thing via a live message.
When working in the context of Bosch IoT Device Management, we recommend using the Device Provisioning API, because the de-provisioning not only deletes the thing but also its associated policy, and the entities existing in Bosch IoT Hub (namely the device and its credentials).

In this example, we will create a managed connection and configure it to react on a live message to a thing, by triggering its de-provisioning via the Device Provisioning API.

The connection wizard of the Connections UI assists the creation of such a connection.

The wizard requires the further inputs:

The created connection is an HTTP connection which configures the Device Provisioning API as an endpoint with the given OAuth2 client credentials.

It contains a single target that is configured to trigger a DELETE request at the resource
/{service-instance-id}/devices/{device-id} , whenever it receives a live message with the specific subject.

The HTTP response received from the Device Provisioning API will be forwarded as the live message response including its response status and body.

The wizard creates a pre-configured connection, but you can of course adjust the connection to your needs before saving it, e.g. change the message subject that triggers the de-provisioning.

Use the Policy section of the thing which is to be deleted and create a separate entry for the Subject of the connection created above.

The example shows the permission to read and write messages with subject “remove” directed to the thing (i.e. inbox) as well as from the thing (i.e. outbox). However, you would only need one line, depending on the Direction you choose in the next section, where you send the message, which will in fact be used as the trigger for the de-provisioning request.

The de-provisioning is triggered by sending a live message with the configured subject to the thing that should be deleted, together with its associated policy and the entities stored in Bosch IoT Hub (device and its credentials).

This can be achieved by making a POST request to the messages resource of a thing at the Things HTTP API:
/things/{thingId}/inbox/messages/{messageSubject}, where

The request body is not used and can be left empty. 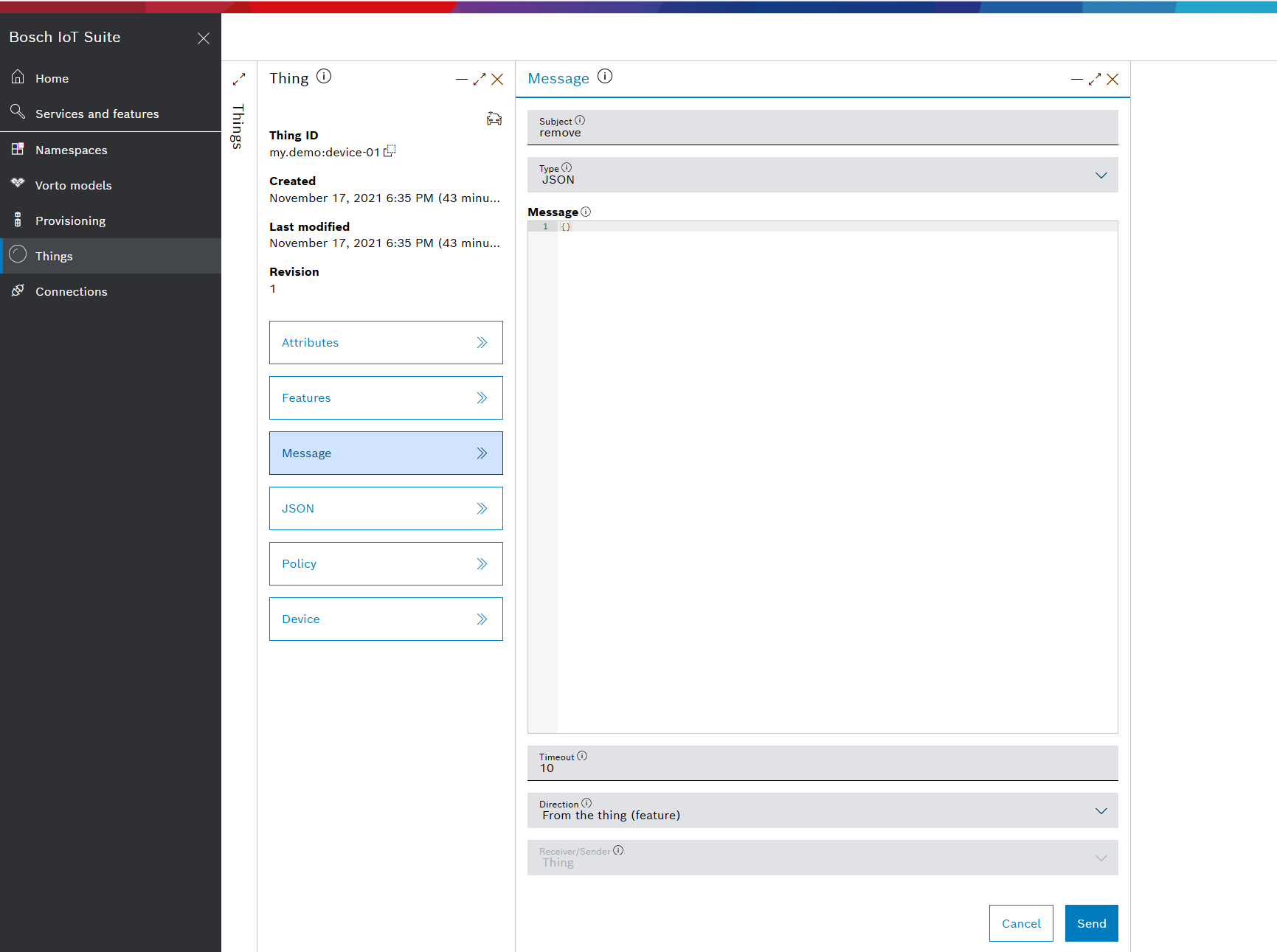 The live messages can also be sent via another channel e.g. WebSocket or a different connection.